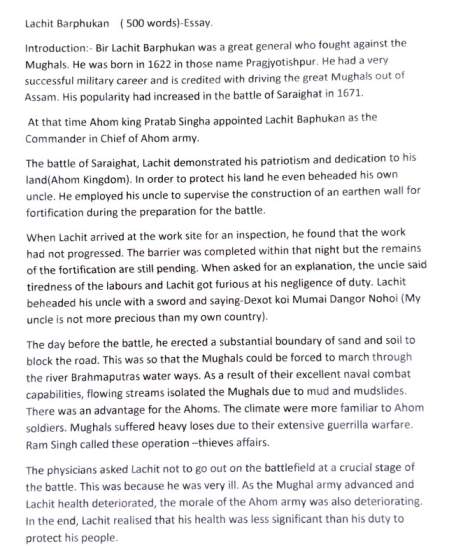 Welcome to our new post. This post will provide you with a PDF of the Lachit Barphukan Essay in English. You can find the 500 Words Essay on Lachit Barphukan, which you can also download in PDF format at the end of this post.

Who Was Lachit Barphukan?

Here we will provide you with a 500-words Essay on Bir Lachit Barphukan. You can also download the Essay in PDF format by the end of this Post.

Introduction:- Bir Lachit Barphukan was a great general who fought against the Mughals. He was born in 1622 in the name of Pragjyotishpur. He had a very successful military career and is credited with driving the great Mughals out of Assam. His popularity had increased in the battle of Saraighat in 1671.

At that time Ahom king Pratab Singha appointed Lachit Baphukan as the Commander in Chief of the Ahom army. In the battle of Saraighat, Lachit demonstrated his patriotism and dedication to his land(Ahom Kingdom). In order to protect his land he even beheaded his own uncle. He employed his uncle to supervise the construction of an earthen wall for fortification during the preparation for the battle.

When Lachit arrived at the work site for an inspection, he found that the work had not progressed. The barrier was completed that night but the remains of the fortification are still pending. When asked for an explanation, the uncle said tiredness from the labor, and Lachit got furious at his negligence of duty. Lachit beheaded his uncle with a sword and saying-Dexot koi Mumai Dangor Nohoi (My uncle is not more precious than my own country).

The day before the battle, he erected a substantial boundary of sand and soil to block the road. This was so that the Mughals could be forced to march through the river Brahmaputras waterways. As a result of their excellent naval combat capabilities, flowing streams isolated the Mughals due to mud and mudslides. There was an advantage for the Ahoms. The climate was more familiar to Ahom soldiers. Mughals suffered heavy losses due to their extensive guerrilla warfare. Ram Singh called these operations -thieves affairs.

The physicians asked Lachit not to go out on the battlefield at a crucial battle stage. This was because he was very ill. As the Mughal army advanced and Lachit’s health deteriorated, the morale of the Ahom army was also deteriorating. In the end, Lachit realized that his health was less significant than his duty to protect his people.

The next day, during the final battle. As he lay on the bed, he was resting. In the sight of Lachit’s poor health, Some soldiers said they lost confidence in him. His aim was to keep the soldier’s passion alive. His patriotic fight in the 17″ century saved Assam from being captured by the Mughal emperor Aurangzeb. When he ordered his fellowmen to mount his bed on the boat to the battlefield. As a result of his ill health, he died shortly after the battle ended. His supreme leader applauded Senapati Lachit Borphukan of Assam

Swargadeo Udayaditya Singha Constructed the Lachit Maidam at Hoolungapara 16 Km from Jorhat in 1672 as his last resting place for Lachit Borphukan. Assam celebrates Lachit Devas every year to commemorate Lachit Barphukans heroism and the victory of the Ahom army at Saraighat on 24 November.

Conclusion:- Lachits patriotism, bravery, dutifulness, and determination shined in the history of Assam, in the face of opposition from the mighty Mughal army. Lachit also succeeded in restoring and upholding the freedom of his country and people. Thanks.

We hope you find this content helpful and are able to download the PDF for the Lachit Barphukan Essay in English.